So today I started reading the Old Testament of the Bible after finishing the New Testament a while ago.
So while Genesis 1 is well known as the creation story of the world, I thought about the words in it my thoughts focused a lot on how everything that is made in the world is "good". The light, the sky, waters, land, vegetation, the birds, the beasts and the fish in the sea - they are all "good". Humans too, are good...

But it is only when everything is put together and completed that the world is described as "very good".

And our perfect, very good world, is something that we have a duty to take care of. For Christians like myself, it's because that's the commission that God gave to Adam - to be a steward of the world. For those who aren't, it's because there is no place in the universe like the world.

So have a great day, and take some time to appreciate all that is "good" around you, and see that everything in the world in harmony, is "very good"

Some of the most serendipitous moments come when you find out about a foreign word that has no English equivalent. I've always found literary works in translation interesting in the way that words, phrases and sentences lose a lot of contextual meaning and implicit meaning when they are translated into English. To me, these words are keyholes into the priorities of a language-speaking race.

I came across a picture on the famous Humans of New York blog that said the following:

"English is a very precise language. I like to use it when I'm describing technical things. But when I'm talking about my feelings, I find it easier to use Spanish.""Why is Spanish best for describing feelings?""Latin people have a lot of feelings. So they have a lot of words to describe them."

I don't think I need to analyse that... the man spells it out quite clearly. The Italians also have a word called "scordatelo" - a word meaning that's crazy, forget it. What does it show about Italians? Maybe that they are laid back and not so serious (hence Siestas?) or maybe that they don't like revolutionary things... Imagine...

Of course, I don't really know which of the two (or others) it could be, but I'm sure someone from the area would be able to tell you.

Anyway, the word that I wanted to share is the word Resfeber - A Swedish word that I have been thinking about a lot over the past few days:

Resfeber (n): The restless race of a traveller's heart before the journey begins, when anxiety and anticipation are tangled together.

My heart is pumping with excitement at seeing and living yet another new place - this time the archaic city of London, but also pumping with the sadness of knowing that I leave place and people behind. It is always sad to leave a place, especially one like Greyton, where the barista at the best coffee jaunt knows your breakfast order, where you are known by almost everyone despite not knowing everyone back, and having friends who you hang around with almost day to day... The sadness comes from the unknown - the fact that you have no idea when or if you will ever see these people again. I certainly hope, and wish that I do.

So as I peel off the photos that have been stuck on my room wall for two months, I think about the past two months and reminisce about how people have become such close friends over such a short space of time.

I think about the memories that I will cherish then tell myself Scordatelo... don't start thinking about that yet, enjoy the remainder of the limited time and think of the memories when you are done making them.
Posted by Matt Shim at 9:40 AM No comments:

Video's up and running! Voila, enjoy - or as the South Africans say - Genit!

Thanks for following this blog... it would be super if you could recommend it so someone else too! (Not that I'm  desperate... ;)

In grade 11 at Newington – my high school – a bunch of “leaders” were called together to do a workshop with Rising Generations, Australia’s leading forum for young leaders. Having already attended a camp earlier in the year, where everybody was open and willing to embarrass themselves for the greater good of having fun and showing others they were leadership-material, I was a little sceptical as to how RG’s tactics would work in opening up a group of generally sensible teenage boys with egos to rival Kanye West’s*. So when our two RG mentors decided to play a game where every time they said train tracks we would have to pump our arms up and down and “toot” to mimic a train,  I sighed and shook my head in disbelief. How could they expect a group of young men to embarrass themselves in this way?

The other day when we were taking a group of kids who were relatively unruly, I thought that I would try the train tracks game to see if they changed their behaviour, and sure enough, with enough simultaneous tooting, they began to gel with themselves and with us leaders. The boys who had been crass and rude had suddenly become attentive and willing to join in with our activities. It is truly an incredible moment when you see someone’s attitude change right in front of your eyes – something really serendipitous. Our games were played with so much vigour and excitement, and as we came out of our skins to ourselves and each other, we planted the seed of responsibility for each other. Ultimately, the idea is that they will slowly become responsible for their own bodies, their friends, their school, their community, and finally the world – making change in a local way to impact the world – to build the train tracks before building the train. Kids especially seem to lap up responsibility - especially in this community. We have already given the responsibility of food security to many young people in the first village community garden which would operate in future to sustain those without garden beds and food.


I feel like I've become more responsible through my travels and taken on a lot more than I would have done otherwise. I've learnt that all sorts of things like the environment and the development of people are things that I really need to feel responsible about – despite only being a small cog in the bigger scheme of things. For me, the reason I am responsible is because I am a Christian and I act as a person of God, for others, it is for the future of the world, economically, environmentally and personally, that drives them.

So I pray everyone who reads this will also pick up some burden of responsibility and be agents of change in their own communities... Happy training - toot toot!

P.S. I realise that this is a bit more of a serious post than I would usually post and also one that has come after a long absence from my page (SORRY!!). I haven’t been feeling creative lately amidst all of the community work that’s been going on. I’ll do my best to update with photos, videos and posts more regularly and I apologize for not doing so sooner!
Posted by Matt Shim at 11:21 PM No comments:

Hi a film for you 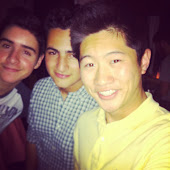 Matt Shim
I'm just an ordinary guy documenting my travels and experiences in an extraordinary world.